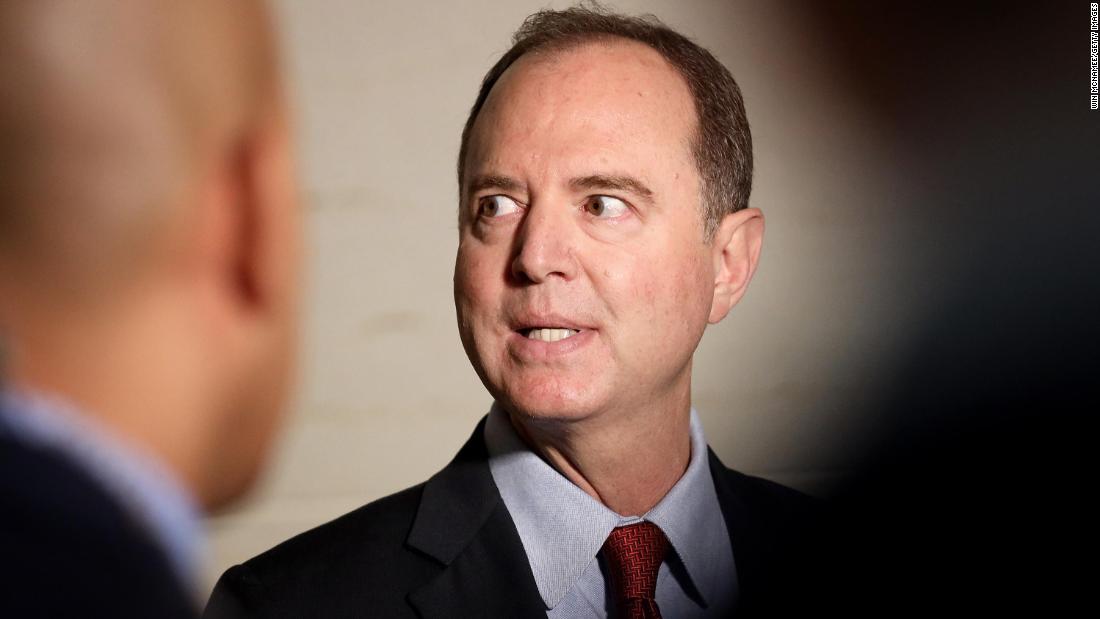 “The failure to produce this witness, the failure to produce these documents, we consider yet additional strong evidence of obstruction of the constitutional functions of Congress,” Schiff told reporters.
In addition to blocking Sondland’s testimony, Schiff said the ambassador indicated he had text messages or emails on a personal device provided to the State Department that State was withholding from Congress.
The subpoena issued Tuesday evening demanded Sondland turn over documents by Monday, October 14, and appear for a deposition on Wednesday, October 16.
“In light of Secretary Pompeo’s direct intervention to block your appearance before our committees, we are left with no choice but to compel your appearance at a deposition pursuant to the enclosed subpoena,” Foreign Affairs Chairman Eliot Engel, Oversight Chairman Elijah Cummings and Schiff wrote in a letter to Sondland.
House Speaker Nancy Pelosi said at an event in Seattle that the administration’s decision to block Sondland was “an abuse of power for them to act in this way.”
Sondland’s attorney Robert Luskin said State directed Sondland not to testify early Tuesday morning.
“He is a sitting ambassador and employee of State and is required to follow their direction,” Luskin said. “Ambassador Sondland is profoundly disappointed that he will not be able to testify today. Ambassador Sondland traveled to Washington from Brussels in order to prepare for his testimony and to be available to answer the Committee’s questions.”
Rep. Jim Jordan of Ohio, the top Republican on the Oversight Committee, said he understood why the administration blocked Sondland’s testimony, charging that Schiff wasn’t running a fair investigation and that he was selectively releasing text messages from former US special envoy to Ukraine Kurt Volker. Republicans are calling on Schiff to release Volker’s interview transcript.
“I’m all for bringing the ambassador in, but let’s only do so after we release the full (Volker transcript),” said Republican Rep. Mark Meadows of North Carolina.
Asked whether he had concerns about the President asking the Ukrainian President and China to investigate his political opponents, Jordan said Trump was “doing his job.”
“When you’re talking about the hard-earned tax dollars of the American people going to a foreign government, the President’s going to make sure that there’s no corruption there,” Jordan said. “He’s doing his job, his duty as the commander in chief, his duty as the President of the United States, so I don’t have a concern there.”
Jordan added that he believed the public had a right to learn the identity of the whistleblower, given that the allegations could lead to impeachment of the President.
Trump said on Twitter that Sondland should not testify before a “kangaroo court.”
“I would love to send Ambassador Sondland, a really good man and great American, to testify, but unfortunately he would be testifying before a totally compromised kangaroo court, where Republican’s rights have been taken away, and true facts are not allowed out for the public…to see,” Trump tweeted.

‘The days of playing nice are done’

Sondland was set to testify behind closed doors before the House Intelligence, Foreign Affairs and Oversight committees as part of the Democratic impeachment inquiry into President Donald Trump and Ukraine. Lawmakers were eager to press him about text messages he exchanged related to Trump’s July phone call with Ukrainian President Volodymyr Zelensky and the freezing of foreign aid to Ukraine that cut to the heart of the Democrats’ impeachment probe.
Sondland, a Trump donor and hotelier who has been EU ambassador since 2018, exchanged messages with Volker and a senior US diplomat in Ukraine about setting up the call between Zelensky and Trump and whether foreign aid was being withheld while Trump and his attorney, Rudy Giuliani, pushed for Ukraine to open an investigation.
Now his testimony is on hold — and it’s not clear whether the department will also block other witnesses that Democrats are seeking. Sondland was supposed to be the first of two witnesses the committee would speak to this week, along with former US Ambassador to Ukraine Marie Yovanovitch, who is still a State Department employee.
The State Department waited until Tuesday morning to direct Sondland not to testify, while it had been clear for several days he had agreed to appear.
Administration officials were in discussions late Monday night about blocking Sondland from sitting down for his scheduled deposition today, an official familiar with the discussions told CNN.
The talks centered around how much the White House should be cooperating with requests from House Democrats without a formal impeachment inquiry vote, which the White House has asserted they need for this to be a legitimate probe, despite Democrats saying otherwise.
Trump and the White House have telegraphed they plan to send the House a letter indicating they will not comply with the Democrats’ subpoena unless the House takes a vote to formally authorize the impeachment inquiry. The department also missed a Friday deadline set by House Democrats to respond to a subpoena and turn over documents related to Ukraine.
A source familiar with discussions inside Trump’s impeachment team says Sondland not appearing is “part of an overall strategy connected to what is viewed as irregularities in the House impeachment inquiry.”
“The days of playing nice are done,” the source said.
Democrats are eager to speak to both to gather more information about what was going on behind the scenes before and after Trump’s call with Zelensky. But Republicans have also found Sondland as a fruitful witness, as he pushed back in the text messages on the notion that the aid was connected to investigations. Republicans have argued that Volker’s full testimony paints a different picture than the text message excerpts Democrats released last week.
“Ambassador Sondland believes strongly that he acted at all times in the best interests of the United States, and he stands ready to answer the Committee’s questions fully and truthfully,” Luskin said

In the text messages provided to Congress, the Ukrainians’ desire to have a one-on-one meeting between Trump and Zelensky is linked to the Ukrainians opening an investigation, something that was discussed before the July 25 phone call where Trump urged the Ukrainian President to investigate Vice President Joe Biden and his son Hunter Biden.
“Had breakfast with Rudy this morning-teeing up call w Yermak Monday. Must have helped. Most impt is for Zelensky to say that he will help investigation—and address any specific personnel issues—if there are any,” Volker wrote to Sondland the week before the call occurred.
After the call, Sondland and Volker discussed potential dates for a meeting between Trump and Zelensky, and Sondland wrote that Trump “really wants the deliverable,” suggesting Zelensky make a public statement about an investigation.
Sondland and Volker helped a senior Zelensky aide edit a statement about the investigation, including citing the 2016 election and Burisma, the company that hired Hunter Biden. There’s no evidence of wrongdoing by Joe or Hunter Biden in Ukraine.
The following month, Sondland was part of a text exchange with Bill Taylor, a senior US diplomat in Ukraine, where Taylor repeatedly raises alarm that aid to Ukraine is being withheld to push for an investigation.
“Are we now saying that security assistance and WH meeting are conditioned on investigations?” Taylor asked.
“Call me,” Sondland responded.
A week later, Taylor wrote: “As I said on the phone, I think it’s crazy to withhold security assistance for help with a political campaign.”
After the text was sent, Sondland called Trump to find out what was going on about withholding assistance, according to a source with knowledge of the matter. Trump emphatically told him no quid pro quo, the source said.
Sondland then responded to Taylor with a lengthy statement.
“Bill, I believe you are incorrect about President Trump’s intentions,” Sondland said. “The President has been crystal clear no quid pro quo’s of any kind. The President is trying to evaluate whether Ukraine is truly going to adopt the transparency and reforms that President Zelensky promised during his campaign I suggest we stop the back and forth by text.”
He then suggested if Taylor still had concerns, he should call Secretary of State Mike Pompeo or his executive secretary.
Last week, Trump downplayed the text messages, saying Friday he didn’t “even know most of these ambassadors.” But he then praised Sondland’s comments. 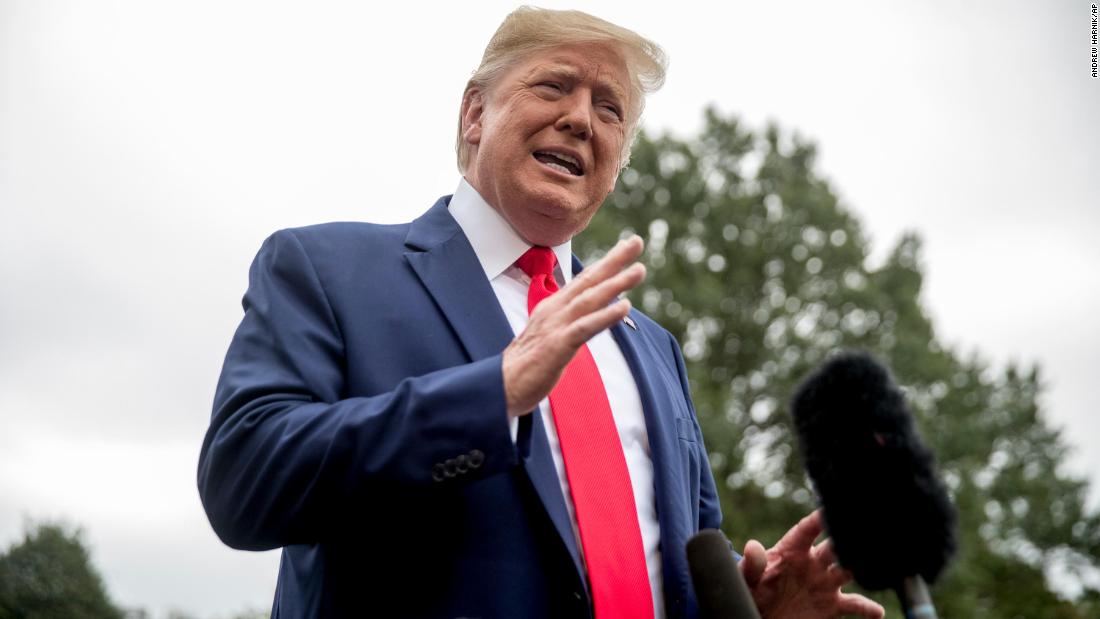 “The text message that I saw from Ambassador Sondland — who’s highly respected — was: There’s ‘no quid pro quo.’ He said that,” Trump said.
But Sen. Ron Johnson, a Wisconsin Republican, told The Wall Street Journal last week that Sondland had described to him a quid pro quo involving a commitment from Ukraine to investigate issues related to US elections and the status of foreign aid to Ukraine. Johnson said he confronted the President about it on a July 31 phone call, and Trump rejected that the two issues were connected.
Johnson’s office said after the Journal story published he did not recall that “the term ‘quid pro quo’ was ever used.”
Sondland, who is political appointee, was previously founder and CEO of the Provenance Hotels chain, according to his State Department biography. While he is ambassador to the European Union, he’s had a specific interest in Ukraine.
“President Trump has not only honored me with the job of being the US ambassador to the EU, but he’s also given me other special assignments, including Ukraine,” he told UATV in July. “We have what are called the three amigos, and the three amigos are Secretary Perry, Ambassador Volker and myself. And we’ve been tasked with sort of overseeing the Ukraine-US relationship between our contacts at the highest levels of the US government, and now the highest levels of the Ukrainian government.”
This story has been updated with additional developments Tuesday.