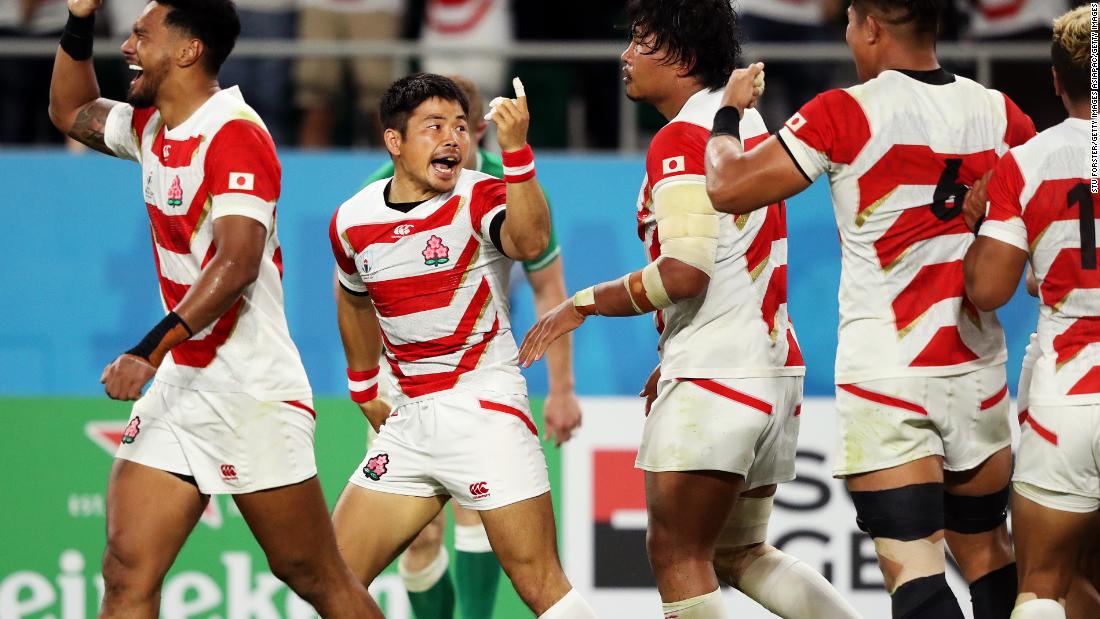 First half tries from Garry Ringrose and Rob Kearney, his effort converted by Jack Carty, had left the Irish 12-9 ahead at the half, with three penalties from Yu Tamura keeping Japan in touch.
READ: Host Japan wins opener after slow start
But the second half saw Japan assume total command with wave after wave of attacks, culminating in a try for replacement Kenki Fukuoka, converted by Tamura. 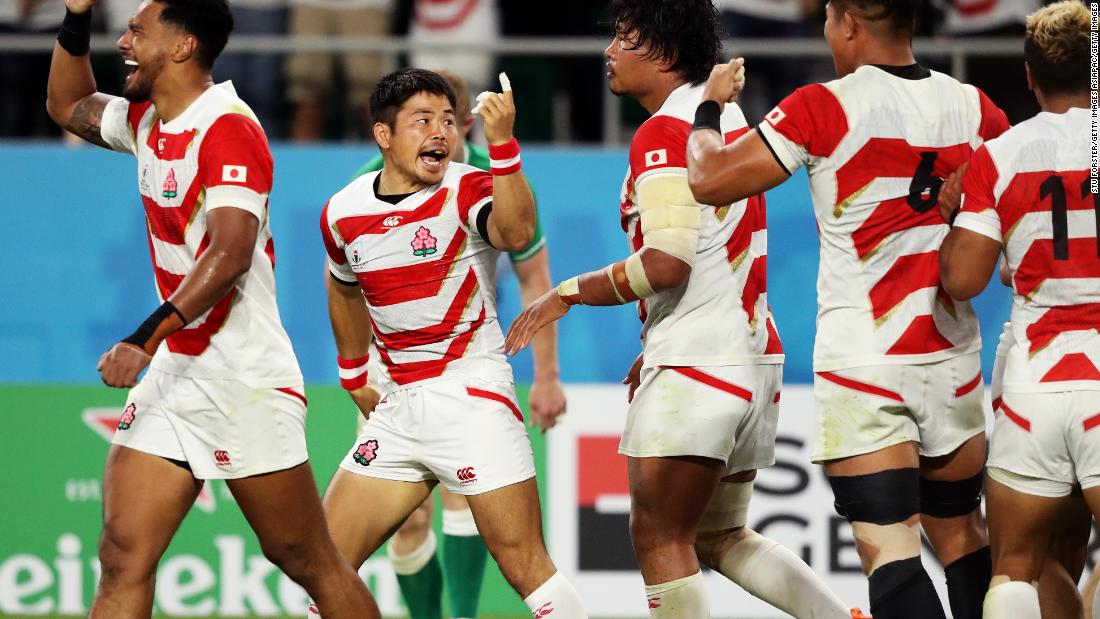 A further successful penalty for Tamura sealed the win for the Brave Blossoms of Japan, who produced similar heroics to beat another traditional Rugby power, South Africa, in the 2015 World Cup.
Ireland went into the World Cup as the No.1 ranked team in the world and coach Joe Schmidt was “incredibly disappointed that we didn’t manage to control the end of the game but they are a tremendous side, they did really well,” he conceded.
READ: Japan fans expect after shock win over Ireland
READ: From tattoos to hi-tech loos, your travel guide to Japan
His side will look to recover against Russia in its next game, while Japan faces tough clashes against Samoa and Scotland in its bid to reach the quarterfinals knockout stage.
For now, Japan coach, ex-All Black Jamie Joseph, could relish a victory that had been long in the making, seen as a crucial clash after the draw for the tournament was made.
“I’m very proud of the players, we’ve been focusing on today for the last year at least, and probably subconsciously the last three years.
“And Ireland have been thinking about it since Monday. So we just felt we had execute our plan,” he said.

Ireland, who thrashed Scotland 27-3 in its opener, had started confidently in a bid to quieten the highly partisan crowd of 47,000.
It looked like succeeding as Ringrose connected with a clever Carty kick to go over for a try in the corner after just 13 minutes. 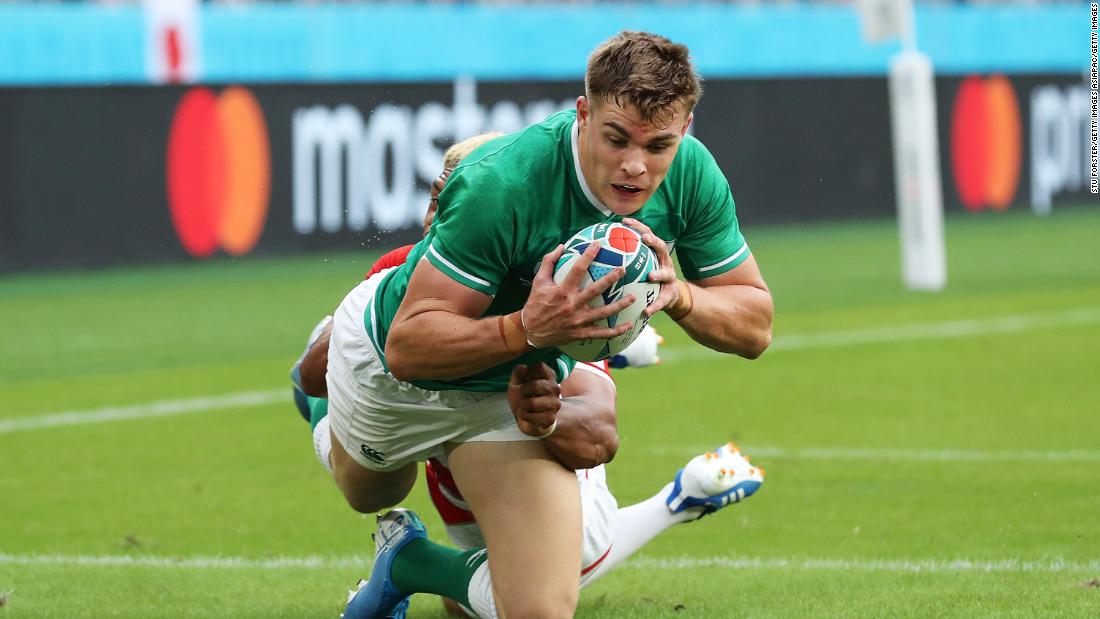 Carty, filling the shoes of Ireland’s sidelined flyhalf star Johnny Sexton, was doing a great job with another crucial assist as full back Kearney dived over seven minutes later, also making the successful conversion.
Japan was wobbling but Tamura kept them in the game with three penalties as the game was already beginning to slip away from Ireland.
The introduction of Japan’s regular captain Michael Leitch after half an hour also proved a key factor and although Tamura missed a penalty chance early in the second half, it was not long before the pressure told on Ireland. 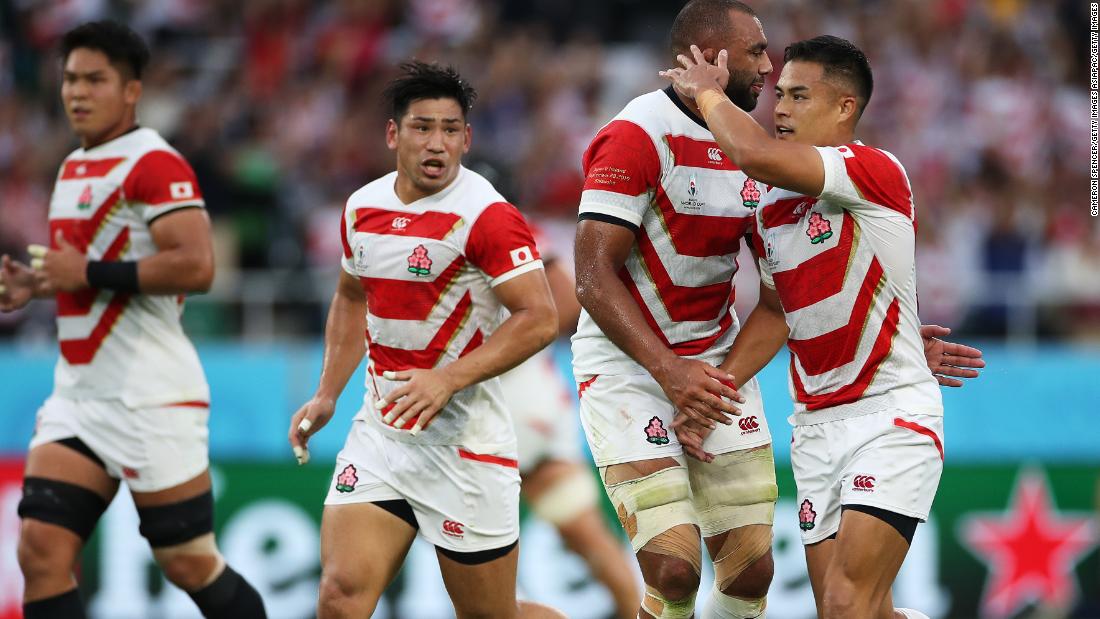 Winger Fukuoka supplied the first killer blow, showing brilliant footwork to cross for his side’s sole try and the lead for the first time in the match, extended by the sure boot of Tamura.
The crowd in the Ecopa Stadium erupted as the ‘Shizuoka Shock” was set to be added to the “Brighton Miracle” – the latter the venue when Japan beat the mighty South Africa Springboks at the 2015 tournament.
View the latest Rugby World Cup news, feature stories, photos and videos on CNN.com.
Ireland huffed and puffed in response, but another Tamura penalty stretched the advantage to seven points and a late Fukuoka burst ensured any chance of a response was nullified.

Wins for Argentina and South Africa

Earlier Saturday, Argentina beat Tonga 28-12 to revive its hopes in Pool C, the victory secured off the back of a hat-trick of tries for hooker Julian Montoya in the first half.
A bonus-point victory for the Pumas was much needed after an opening 23-21 loss to France in the opener, with a crunch match against in-form England in Tokyo on October 5 now crucial for qualification hopes from the tough Pool.
“I thought we were very good in the first half and not in the second half,” said coach Mario Ledesma.
“We have a very big week to prepare a final against the English next week so there is a lot of work to do.”
Saturday’s World Cup action was rounded off by a routine win 57-3 win for South Africa over neighbor Namibia in Pool B.
The Springboks ran in nine tries against the lowest-ranked team in the tournament, returning to winning ways after an opening defeat to favorite New Zealand in a pulsating match last weekend.