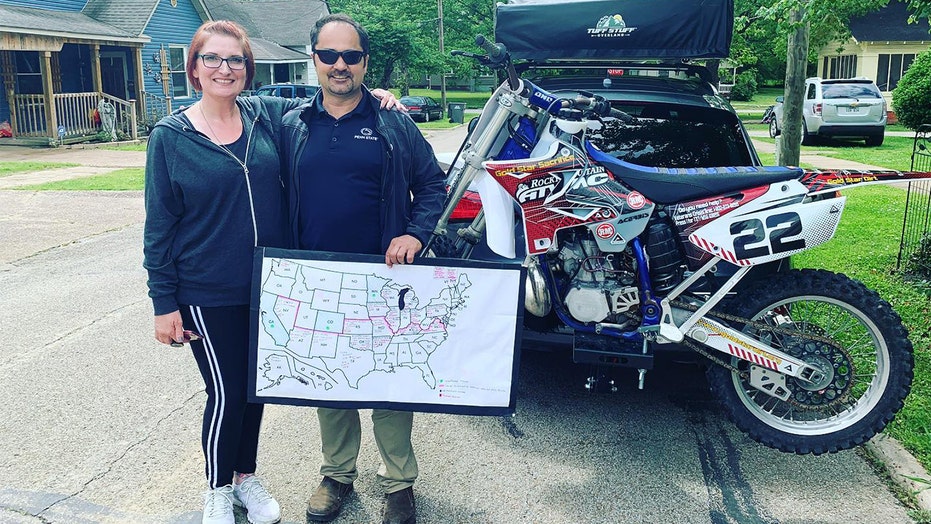 Sherman’s singular yet powerful mission: telling the stories of fallen service members through the voices of Gold Star families, those who have lost loved ones through military service. For them, “the grief never ends,” Sherman said.

“I was going to retire in San Diego and drive back to Massachusetts and stop by the hometowns of fallen service members that I had served with and share some memories with their Gold Star families that maybe they had not heard before,” Sherman told Fox News.

He had seven states left as of Wednesday night – Alaska, Hawaii, Idaho, Massachusetts, Oregon, Utah and Washington, with plans to drive to Utah on Thursday. Sherman said he will fly from Hawaii to Massachusetts for his symbolic last visit, as that’s where he entered the military.

He was preparing for a three-month inpatient treatment program for post-traumatic stress disorder, or PTSD, before he retired, when he decided to start collecting stories.

Sherman lost friends to suicide related to PTSD, including one who confided in him but asked him not to share for fear of losing his security clearance. His friend later killed himself, Sherman said.

After struggling with guilt and regret, and after another friend shared his own battles with the same issues and how he could get help, Sherman was diagnosed with PTSD and an MRI revealed he had 12 traumatic brain injury-related lesions.

As he prepared for retirement, his purpose became clear, and he wanted to document Gold Star families’ stories on behalf of the nation, Sherman said.

Just about every story could bring tears to people’s eyes.

“I feel the weight deeply during and after each interview. I can’t count the number of times that I have shed tears right along with the family. They are pouring their hearts out right in front of me, someone that they don’t even know,” Sherman said.

“I feel the weight deeply during and after each interview. I can’t count the number of times that I have shed tears right along with the family. They are pouring their hearts out right in front of me, someone that they don’t even know.”

He recalled a young woman in Montana, Rheanna Tanner, who said it was “love at first sight” with her Marine husband Cpl. John Cory Tanner. The two married and she got pregnant at 18. John Tanner deployed to Iraq when his wife was four months pregnant. An IED killed him when she was nine months pregnant.

“Rheanna buried her husband and three days later gave birth to their son, [whom] he never got to meet,” Sherman said. “Rheanna said that in all of that pain, anguish and turmoil, and being 19 and a widow, giving birth to their child was the best part of her young life.”

When he started the project, Sherman started a Gold Star Dirt Facebook page, the “dirt” referring to his love of dirt bikes and the intended mode of transportation for his road trip. While he decided to drive a car, he has continued to travel with his dirt bike, along with a pop-up tent.

Once he established an online presence, Sherman connected with a Gold Star sibling whose brother died in Iraq. Kristine Flores, a TV producer in San Jose, Calif., has been producing the project, contacting the Gold Star families and lining up interviews.

The Library of Congress also spotted the Gold Star Dirt and reached out to see if Sherman knew about the Gold Star Family Voice Act, which expanded the Veterans History Project mandate to audio and video first-person interviews.

It turned out the Library of Congress was in search of the stories Sherman wanted to tell.

“There it was – now the mission had purpose and scope,” he said.

Sherman said he started to prepare for his mission and plan his travel route.

“My thought process for the route came out of trying to skip the northern winter in the United States. I drew a line across the nation and figured that by the time I visited the southern states, met and documented the family stories and hit the East Coast, the northern winter would be mostly over,” he explained.

“I was worried about the winter, as I would be camping my way across the nation using my rooftop tent. I figured that this way I could keep expenses low as I don’t have any funding, only my retirement, and disability from my military retirement,” Sherman said.

Now, a year later, with his project nearing completion, Sherman has submitted 20 states’ worth of stories so far.

The Library of Congress has confirmed a donation ceremony date for Nov. 1 at 10 a.m., and every Gold Star family that has participated in the project will be invited to see their loved one’s story be donated into the National Archives, Sherman said.

He said he would reach out to members of Congress in the families’ districts to invite them to the ceremony as well, and also wanted to invite philanthropic groups to donate so the families wouldn’t have to pay for travel expenses to attend the ceremony.

Down the road, the Library of Congress is expected to make the interviews available to view online, but Sherman noted that the process would take time.

“I have been putting together small-form pieces while on the road and releasing them on our social media when I can. The response has really been amazing,” he said. “So many want to hear these stories of love, honor and sacrifice.”

He added, “Right now, I just need to focus on finishing this project to the best of my ability and in a manner that is in line with the kindness, love and honor that all these families have shown me.”