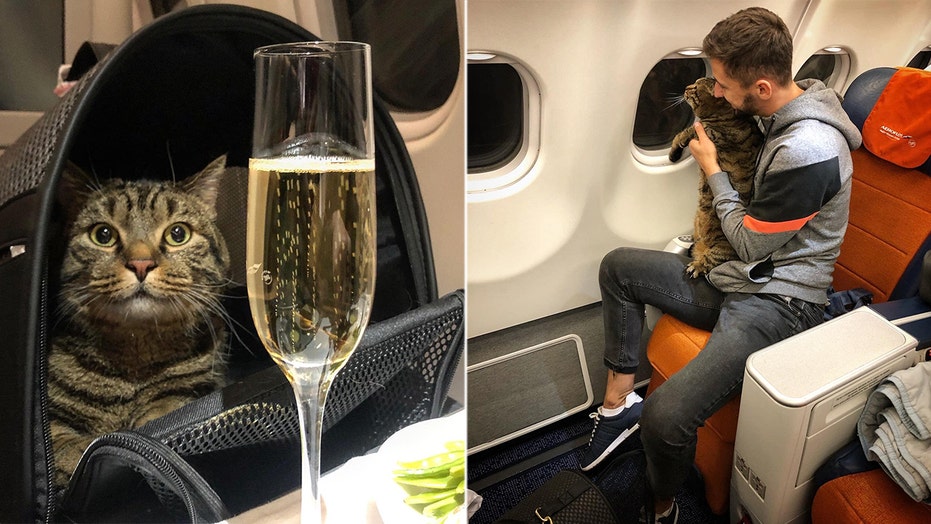 One loyal Aeroflot passenger has reportedly lost about 400,000 airline miles after playing a game of cat and mouse with the carrier, sneaking his “fat” feline onto a recent flight by duping officials with a thinner kitty as a copy-cat body double. (Mikhail Galin)

Unwilling to have Viktor make the lengthy trip in the luggage hold, the 34-year-old man made the “strategic decision to find a similar cat of a lower weight” in the layover city. Seeking advice on Facebook, Galin crafted what he believed was a perfect (or purr-fect) plan for the heist.

To get around the restriction, Galin arrived at the airport with Viktor, a lookalike “cat double” named Phoebe, and Phoebe’s owners, according to the AFP. The weigh-in with Phoebe the skinny kitty apparently went well, as Galin was able to check into business class with his paunchier pet in tow.

“The operation to switch Viktor the fat cat for Phoebe the miniature kitty was successful,” the Aeroflot customer said, AFP reports. Galin shared celebratory images of the feat to Facebook, posting pictures of Viktor looking out the plane’s window and staring down a glass of champagne, where they quickly went viral with over 18,000 likes and more than 3,000 shares.

However, Galin perhaps acted too quickly in letting the metaphorical cat out of the bag. Aeroflot soon caught wind of the hijinks, and used CCTV footage to confirm that Galin had indeed swapped felines before the flight in order to bring the fatter cat on board, the BBC reported.

Officials for the Russian airline soon discovered that Galin had indeed used a 15-pound cat to pull off the prank, and terminated his frequent flier miles in response. Reports indicated that the he had almost 400,000 miles saved up, according to the AFP.

“Aeroflot has taken the decision to take this passenger out of its frequent flyer program. All of the miles collected during his time in the program will be annulled,” a spokesperson said.

Disgruntled commenters were allegedly up in arms over the decision, with some accusing Aeroflot of fat-shaming Viktor.

Galin, meanwhile, has taken the punishment in stride — and good humor.

Following the incident, he shared an image of Viktor as a kitten to Facebook, and jokingly reminiscing on the days when his precious pet “still met the requirements of the air carrier.”