From Vardy to Lewandowski, vintage traditional No 9s are thriving again

The modern game was supposed to have left such centre-forwards behind, so why are they topping the scoring charts? 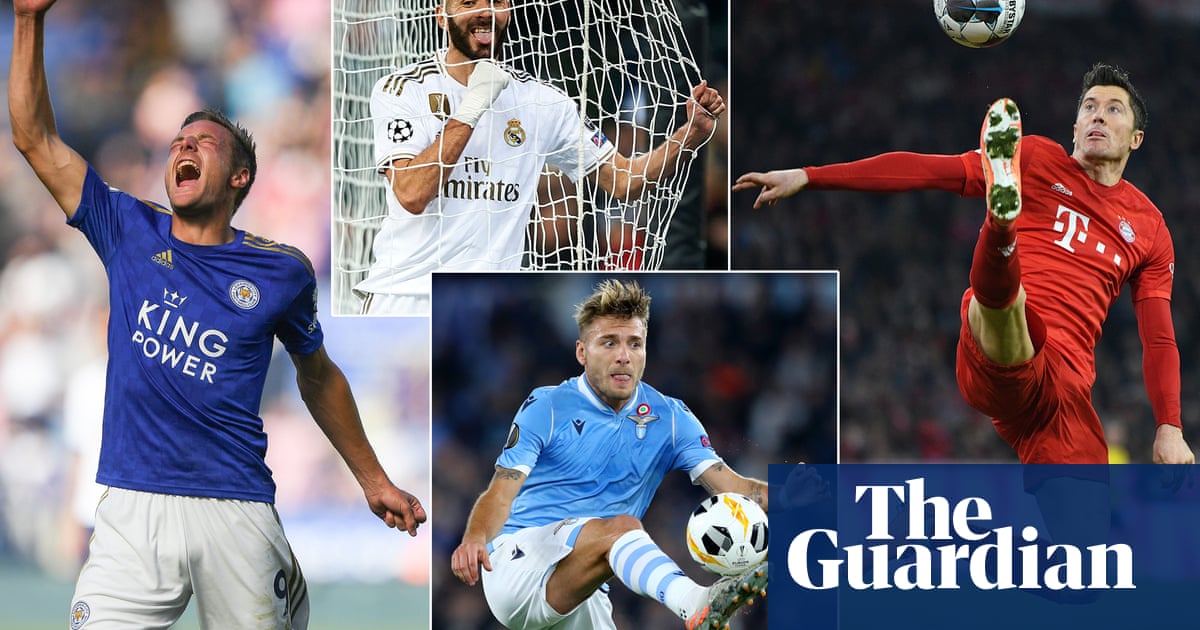 Ever since Hungary swaggered into Wembley in 1953, deploying Nandor Hidegkuti as a false nine and shattering Englands superiority complex, the traditional No 9 has been left a yard off the pace, fighting for a place in the beautiful game.

These days strikers have to be fit, hard-working and flexible, often leaving the headlines for those who profit from their efforts. It has been 15 years since an out-and-out striker Milans Andriy Shevchenko won the Ballon dOr. That marked the end of a golden age for goalscorers, now endangered in an era of relentless pressing and possession.

Thats the theory but the numbers tell a different story. Jamie Vardy, Robert Lewandowski, Karim Benzema and Ciro Immobile of Lazio lead Europes scoring charts, plundering 50 goals between them already this season. Immobile is the youngest at 29, Vardy the oldest at 32. Strikers scoring goals should never be a total shock but these traditional forwards are now flourishing in a game that was leaving them behind.

The quartet do have common traits. Of the four, only Benzema has spent a decade playing at the highest level. When the Frenchman joined Real Madrid in 2009 Lewandowski was still playing in Poland, Immobile was honing his skills in Italys lower leagues and Vardy was a non-league player.

The Leicester forward plays with an intensity that belies his age, too, and has been able to steer clear of niggling injuries.

Vardy took the decision to retire from England duty after last years World Cup. Benzemas four-year international exile was not his choice, but additional rest periods may be crucial to their longevity. Domestic and international schedules have never been more demanding. Last summer there was barely a three-week gap between the Afcon final and the Premier Leagues first games.

All four players are also benefiting from domestic stability, with a total of 25 years experience at their current clubs. Lewandowski and Benzema have taken on totemic roles with sides in a state of flux, Vardy and Immobile have evolved to stay in tune with their teams, but strikers everywhere are benefiting from broader tactical trends in the European game.

Football has rediscovered its physicality, with Jrgen Klopps Liverpool marking a watershed moment with their Champions League fightback against Barcelona. Even Pep Guardiola, rarely the centre-forwards friend, has Manchester City whipping crosses into the mixer. VAR has also played a part. Studies have shown that its introduction has slowed the pace of buildup play and increased uncertainty in defences. All of which is good news for goalscorers.

Despite these helpful conditions, the modern forward must still adapt to survive. Vardy is the perfect example of this; he helped lead Leicester to the title in 2016 as a spiky, reactive menace, tricky and quick as a winger but with a centre-forwards ruthless streak. But when Arsenal made an offer for his services that summer, brows were furrowed. How could Vardys style work within a team playing on the front foot?

Brendan Rodgers has shown us how. Were playing to his strengths, which is to be direct. Jamies strength isnt linking up the game and playing people in its being on the last man, the Leicester manager said. Operating in more congested penalty areas, Vardy is now creating the extra yard his pace used to give him. Against Arsenal, the forward scored one goal and set up another by peeling away from goal at the end of fluid passing moves.

Vardy can also profit from Leicesters pressing game, primed to pounce on turnovers high up the pitch. His versatility as a finisher is also vital: of his 10 league goals from open play this season, four were scored with his left foot, three with his right, and three with his head. Taking an average of only two shots per game, the 32-year-old has an expected goals (xG) tally of five so far. Right now, he may be Europes most clinical finisher.

Like Vardy, Immobile has made tactical changes but while the Leicester man has moved forward, the Italian has stepped back. A reliable goalscorer under Simone Inzaghi since joining the club in 2016, Immobile has found another level this season, taking fewer shots per game but scoring more consistently in a direct, counter-punching system that suits him perfectly.

He has scored 14 league goals already exactly half of Lazios total. The only man outscoring him in Europes big leagues is Lewandowski at Bayern. The Pole has 23 goals in 18 games for them, but he has not fine-tuned his all-round game. Instead, he has supercharged it. Lewandowski is currently taking an average of five shots per match, and given his influence on a team in transition, 16 Bundesliga goals is actually in line with xG predictions.

The 31-year-old is not as pure a finisher as Vardy and Immobile, instead assuming creative control of the team in a manner reminiscent of Cristiano Ronaldo in his later days at Real. Lewandowski has scored in each of Bayerns 11 league games, and his highlight reel showcases an ability to score every type of goal, from long-range screamers to set-piece headers.