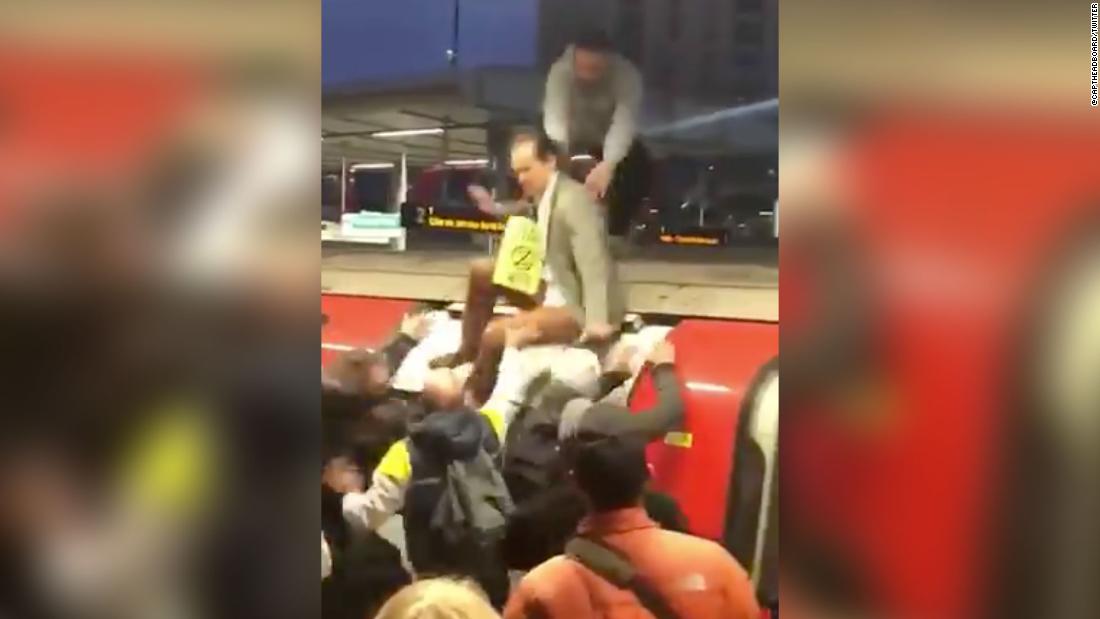 (CNN)London commuters dragged climate change protesters off the top of trains on Thursday morning, as clashes broke out between peak-hour passengers and activists who disrupted travel in the British capital.

Demonstrators, who are intent on forcing government action on ecological breakdown, hung a black banner in the east London station of Canning Town that read: “Business as usual = Death.”
With trains stopped at the station, angry commuters soon took action into their own hands. Videos on social media showed a large crowd shouting at a protester on top of a train and throwing objects at him, before a commuter grabbed his ankles and dragged him off the roof. The crowd below surged forward into a physical altercation, which ended only after station staff and other passengers intervened.
Four people have been arrested so far due to the “obstruction incidents at Stratford and Canning Town,” according to the British Transport Police (BPT).
The BPT added that they were still at Shadwell Station, where “specialist teams are working to remove four other protesters.”
Commuters took to social media to criticize Extinction Rebellion’s actions, saying that the group was alienating working people by disrupting public transport, and that blocking an electric DLR train was “hypocritical,” as it forced passengers to take taxis to work.
But Extinction Rebellion has said the actions are necessary to bring about the type of radical change necessary to reverse the climate crisis.
“The question people need to be asking themselves is, ‘why does anyone, regardless of their class, regardless of their race, feel willing to put themselves in a situation as dangerous as the one we saw this morning. Protesters have shown an incredible act of sacrifice to fight for the lives of thousands of people around the world, who are already dying because of this ecological crisis,” Joel Scott-Halkes, a spokesman for Extinction Rebellion told CNN. 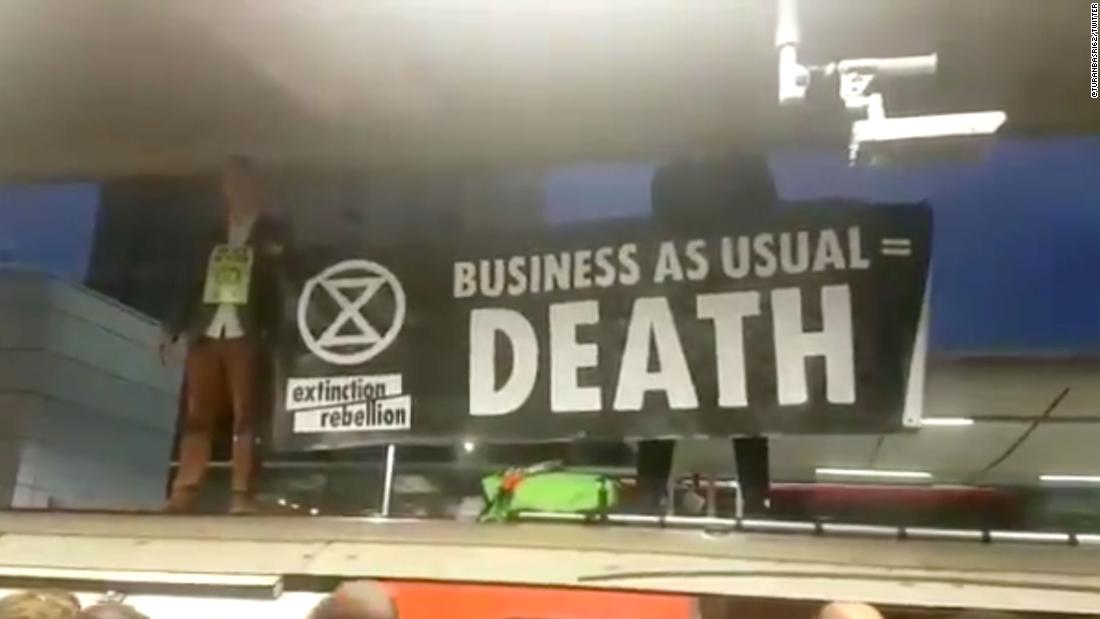 “This is not about disrupting specific types of transport, but disrupting business as usual… everything needs to stop and we need to make drastic changes,” he added.
London Mayor Sadiq Khan condemned protesters for the action, which he said was “dangerous,” “counterproductive” and an “unacceptable disruption to Londoners who use public transport to get to work.”
Khan urged the demonstrators to “protest peacefully and within the boundaries of the law,” adding that their action was an unfair burden on an already overstretched police force.
In a statement Thursday morning, after the fights broke out, Extinction Rebellion said the protesters had understood that violence “was a possibility,” but that they were willing to go to prison for their cause.
The group added that it had targeted the central London Underground lines because it would “have a severe impact upon business within the capital.”
Normal service has now resumed across London’s transport network, according to the Transport for London site. All other lines are operating as usual, but are wary of further scuffles — the Metropolitan Line posted on Twitter asking commuters not to attack the protesters or “resort to violence.”
Canning Town Station was closed down during the scuffles, but has since been reopened.
Just this week, London became the first city to prohibit Extinction Rebellion from staging protests. Police cleared activists from makeshift camps in Trafalgar Square and other sites in London, where the group had congregated since its “International Rebellion” protest began last week.
London’s Metropolitan Police said the crackdown was intended to prevent “ongoing serious disruption to the community.” 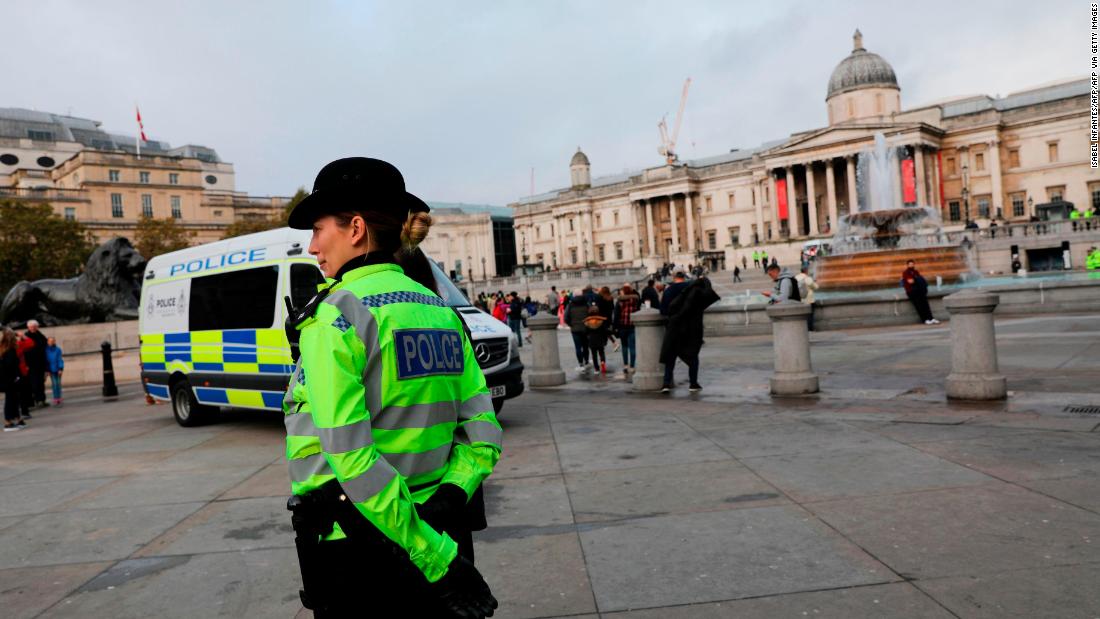 Extinction Rebellion decried the London ban as “erosion of democracy,” and called for greater attention to the climate crisis as hand. The day after the ban was announced, the movement’s co-founder, Gail Bradbrook, climbed atop the entrance of the UK Department of Transport while other activists glued themselves to the building below. Bradbrook was arrested shortly afterward.
Since Extinction Rebellion launched a year ago, the decentralized organization has attracted thousands of protesters to participate in nonviolent civil disobedience aimed at forcing government action on ecological breakdown.
Though they have helped transform the public debate surrounding the climate crisis, they have also been criticized for their tactics. In previous demonstrations, they have sprayed 1,800 liters of fake blood at Britain’s finance ministry, poured fake blood over the famous Charging Bull statue on New York’s Wall Street, and glued themselves to the entrance of a power company’s offices in the Netherlands.